College of the Environment, Forestry, and Natural Sciences2018-2019

Please note that students may be able to use some courses to meet more than one requirement. Contact your advisor for details. 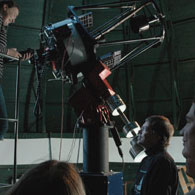